In the coastal areas between Esmeralda in Ecuador and Tumaco in Colombia lived an indigenous society called Tumaco or La Tolita; this was an outstanding culture in artistic expression, in what is crafts and goldsmithing. Through this article, we invite you to explore a little more about the Tumaco Culture. 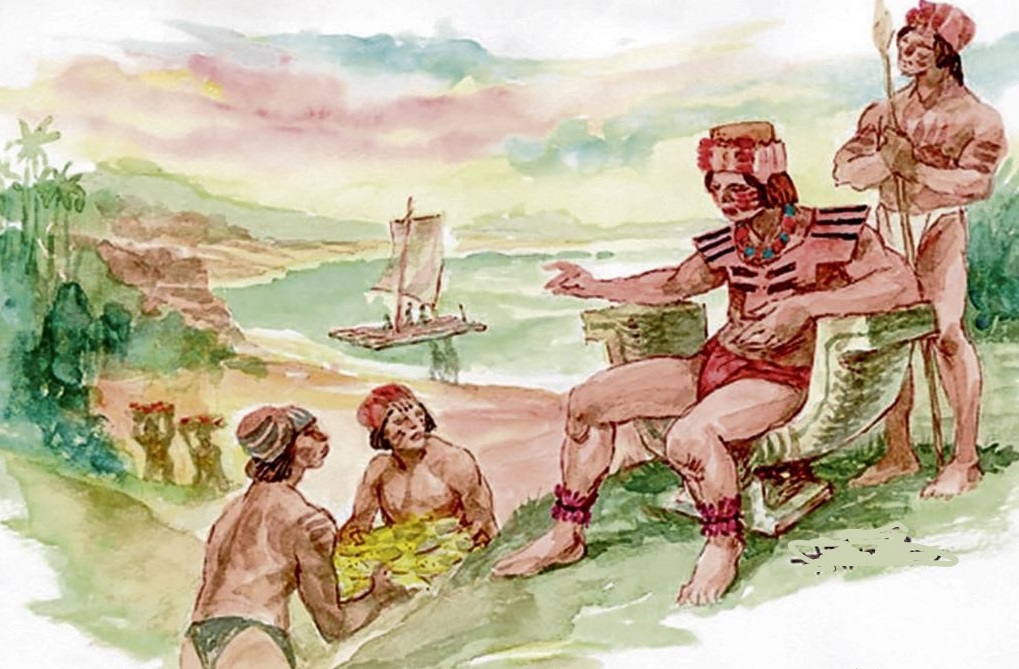 The Tumaco-La Tolita culture was an indigenous tribe that was present during the pre-Columbian period, it developed and evolved in the spaces of the insular territories of La Esmeralda in Ecuador to Tumaco in Colombia. Its origin dates from the year 600 a. C. until approximately the year 200 AD; These natives reached their maximum cultural expression, before the arrival of the Incas in this territory.

They defined themselves as a community based on ceremonial veneration and with a fabulous artistic vision, something that other communities in the American territory lacked. The artistic ability of these natives is considered one of the most advanced in the entire pre-Columbian period.

The archaeological finds that have been found in these places cover a large number of forms, including representations of gold and masks with anthropomorphic features. Based on the findings, it is feasible to establish that this culture had a social organization that revolved around art and religious ceremonies.

Several archaeologists have stated that the Tumaco culture developed between 700 BC and 500 AD Supposedly, its beginnings had its roots in the Olmec culture of Mesoamerica, motivated by the similarities between these two artistic expressions.

Also, it is asserted that these peoples came from the Pacific Ocean to Peru, affiliating with the Chavín culture, and then migrated to Ecuador and Colombia. On the other hand, there is evidence of the connection between the Tumaco and other Ecuadorian indigenous groups such as Jama-Coaque and Bahía. 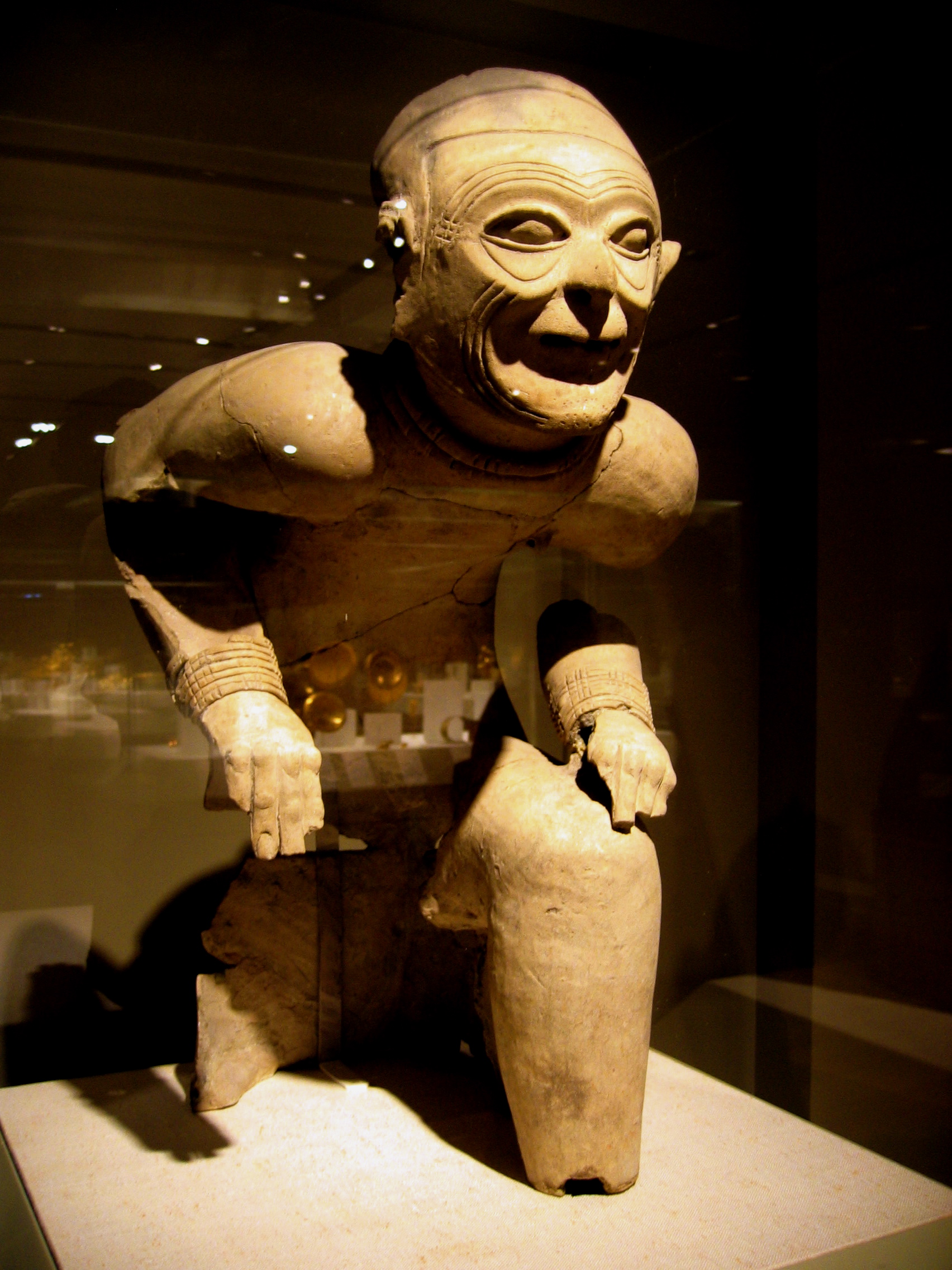 Tumaco in the Colombian region, in this place three stages of times were experienced in which this culture was present, these were:

La Tolita on the north coast of Ecuador, in this territory three stages of time were also evidenced where this culture settled, these were:

Later they joined other tribes, persisting until the arrival of the Spaniards where they were subjected to live as slaves exercising the work of mining.

The description of this culture can change depending on the kind of source of information that is consulted about these natives. There are several archaeological investigations that describe this culture as La Tolita, while others stipulate it as the Tumaco culture. Both conceptions are correct; The territory occupied by this society is more complex than the original expression indicates.

The Tumaco-La Tolita society was not completely similar. This population was made up of a set of small congregations that had characteristics very similar to each other. Generally, these settled in the territories of La Tolita, Monte Alto, Selva Alegre, Tumaco and Mataje. The development of the population of these tribes gave rise to this culture.

In other words, the territorial area that this culture once occupied is more immense than its name seems. In its completion, the culture develops from the Esmeraldas (a tributary located in Ecuador) to Calima in Colombia. However, for practical reasons, its name refers to the most important population and cultural groups, located in Tumaco and La Tolita.

In political terms, the Tolita culture was established in manors with a social ladder based on work performance or movements for political purposes. Political and economic command was thus represented by the ruling elite in the various semi-urban centers. Instead, the lower class was made up of agrarians, and an upper class such as jewelers and craftsmen, separated from support activities.

These governments of the Tumaco culture were administered by theocratic representatives who did not produce anything, on the contrary, their support was provided by the human resources of the lower class. Also, among other exemptions that the leaders had, was that these would be the only ones who would obtain ossuaries in the hills. Furthermore, they governed both the ceremonial existence and the economic management of the community; these used cranial deformation as an emblem of social hierarchy. 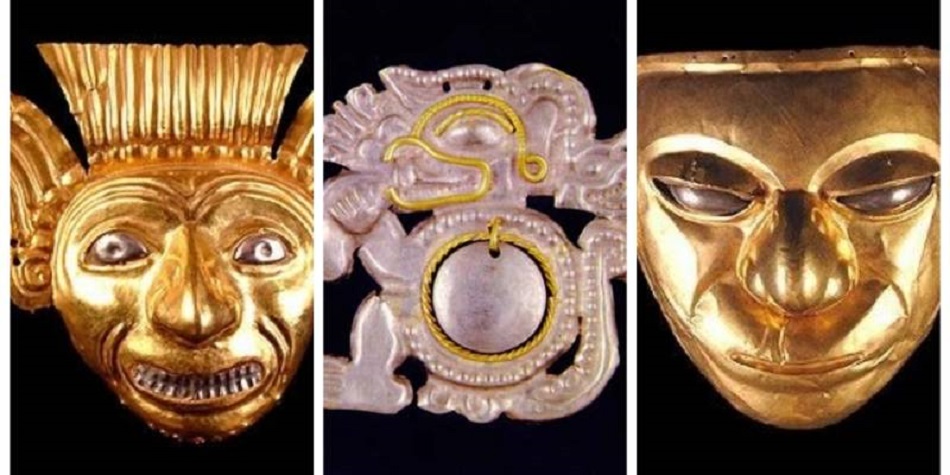 Within the community of Tumaco, the shaman played a significant guiding role due to his religious wisdom. Endowed with powers to relate to the spiritual universe, he represented the intermediary between the cosmological universe and the community.

According to the findings, they allegedly used feline masks and skin costumes to pretend to be a jaguar. Another figure who enjoyed the respect and admiration of the people was the old man, full of wisdom and experience.

Likewise, the Tumaco had a way to express their conception and mystical sense, which was demonstrated through their art.

Basically, the economy of the Tumaco culture was based on the cultivation of corn, pumpkin, cassava, cotton and coca. To farm on the plains, they adapted the surface of the land using a complex method of irrigation; this huge contraption had grooves from 4 to 9 meters wide and waru waru from 4 to 20 meters wide and 50 centimeters high; likewise, they handled agricultural farming instruments for furrowing and sowing, such as trapezoidal or rectangular axes.

In a marshland environment with abundant maritime resources, artisanal fishing was a transcendental activity. In which they used small boats, meshes with loads of stone and hooks installed in line. In the same way, the economy was perfected with the hunting of jungle animals such as: birds, reptiles and mammals. On the other hand, they manipulated the metal to make decorations, elements such as gold and platinum that they took from the sand of the rivers.

Their settlement at the mouth of mountain streams provided economic reciprocities with the mountain tribes. They also maintained productive links with the coastal cities of the Pacific Ocean, through exchange networks. 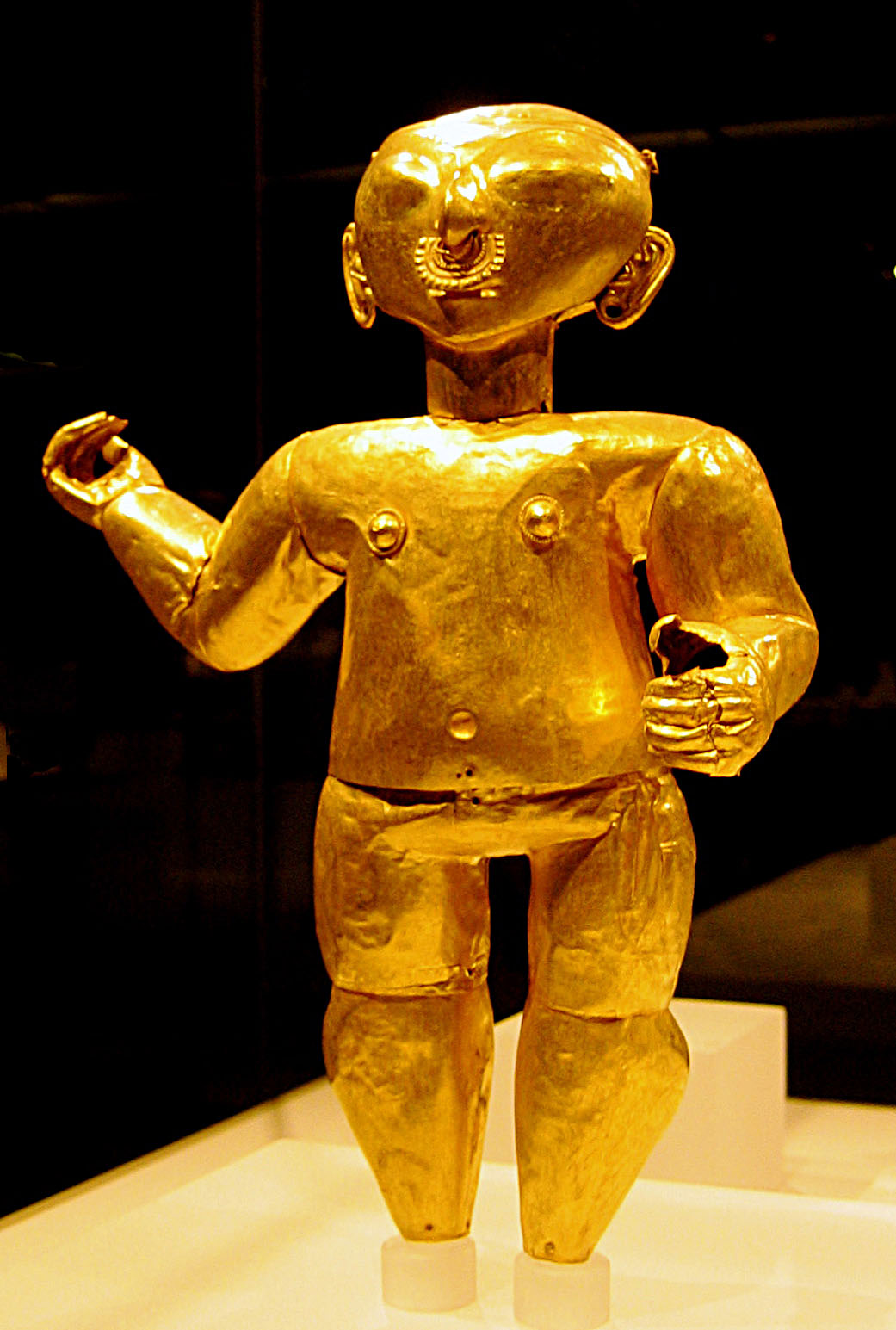 Typically in most South American societies of that time, this culture exhibited a merely polytheistic religion. Likewise, they believed in animism and the souls that were a transcendental piece of their mystical culture.

Shamans played a significant role in the beliefs of this society. These gave rise to a chain of rites infused almost entirely by animals and beings from the natural environment. In turn, it was common to use the jaguar, the viper, the eagle, the monkey or the alligator as species to worship them, since it was believed that they personified the deities on Earth. The jaguar was the most significant deity associated with the tropical forest, in addition to strength, fertility and virility; and instead, the viper was related to the regeneration of life or transformation.

Additionally, shamans also functioned as priests in the religious culture of this society. This priestly action was somewhat extensive and large structures were built to serve as ritual centers, which were ruled by the shamans of the community.

During the rituals, it was very common to use a hallucinogenic compound, with the mushrooms that were found in the same area occupied by this society.

This complex spiritual world was represented by ceramic or metallic images, the result of a close relationship with the environment. The religious expression was also reflected in a series of archaeological works destined for worship and the priestly office. Regarding the funeral ceremonies, they buried their succumbed lying on their side, with garments, attire and funerary utensils.

Some of the main ceremonial sites of the Tumaco culture include the following, which will be detailed below:

Appreciated as the great ceremonial seat of the Tumaco culture, it is for this reason that La Tolita Key was the center of commerce. Mineral resources such as obsidian, quartz, jade and emerald were obtained there, which had a high emblematic price for their use in rituals.

Located at the mouth of the Santiago tributary, in the Ecuadorian town of Esmeraldas, it was identified by its numerous mogotes. In particular, this key has been transformed into a large goldsmith, ceramic and steel factory, where statuettes symbolizing mythical beings and deities were created. Therefore, a large number of works saved from this culture can be found in the Central Bank Museum in Quito.

One of the most distinctive mogotes was in the center of the island, which served as a burial area. The remains of human and animal corpses have been found there, bone sculpture is another expression of the site. Likewise, La Tolita has other islands such as Tolita del Pailón, Tolita de los Ruanos, Tolita de los Castillos.

Located about a hundred kilometers from the island of La Tolita, from where there is a more accessible and comfortable entrance. In these lands defined by coastlines and river plains, a phase of the Tumaco culture unfolded in small towns. Of which progress has been made in four essential settlement areas: Inguapí, Balsal, Nerete and El Morro. 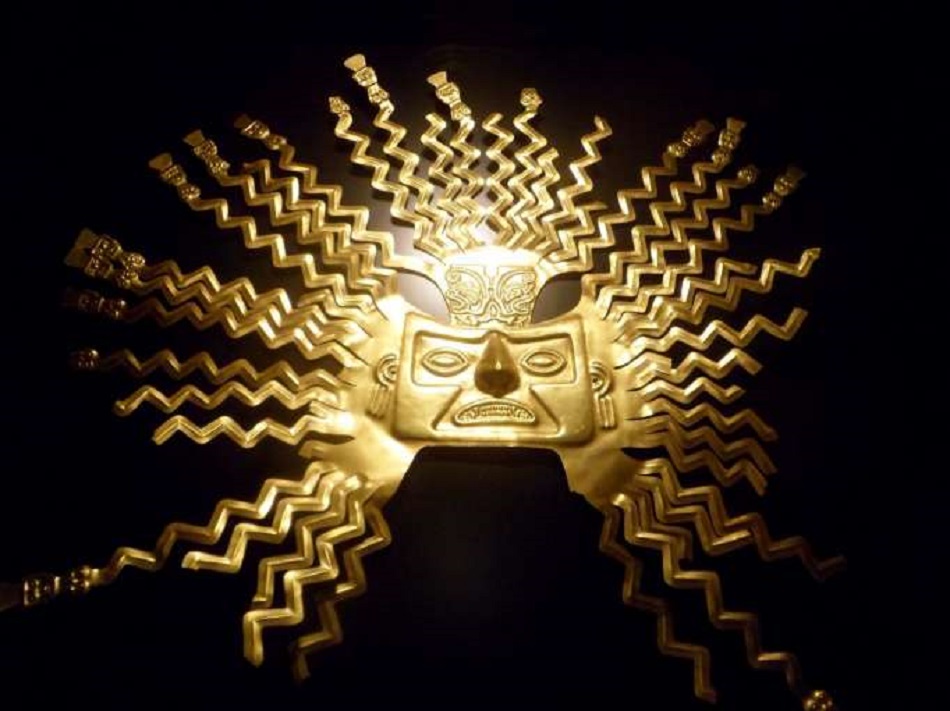 During 2011, a group of anthropologists managed to recover 3228 pieces of pottery and 54 compendia of rock from this area. Among those that stand out accessories to pulverize grains, scrape tubers, cut, scrape and hit other materials, as well as containers.

The crafts were one of the most notorious cultural manifestations of the Tumaco culture; Actually, craftsmanship in all its representations is what distanced this society from other tribes located in the same territory. Their methods were somewhat ahead of their time and the compositions they produced had deep social significance.

Goldsmithing was also a very distinguished skill for the population of this culture; They especially manipulated gold, which led to the discovery of a large number of valuable figures in the archaeological zones of these regions of Colombia and Ecuador.

Likewise, through goldsmithing and crafts, the Tumaco culture manifested its cultural plurality, through which it recreated significant social and religious distinctives that represented its culture. They also made sculptures with a carnal meaning, referring to the numerous fertility rites that this civilization used to perform periodically.

The ceramic productions of this culture exhibit compendiums linked to their community; In various cases, figures that played a mystical role were incorporated, as well as the making of effigies physiognomically equivalent to the inhabitants of the tribe, which was also common. 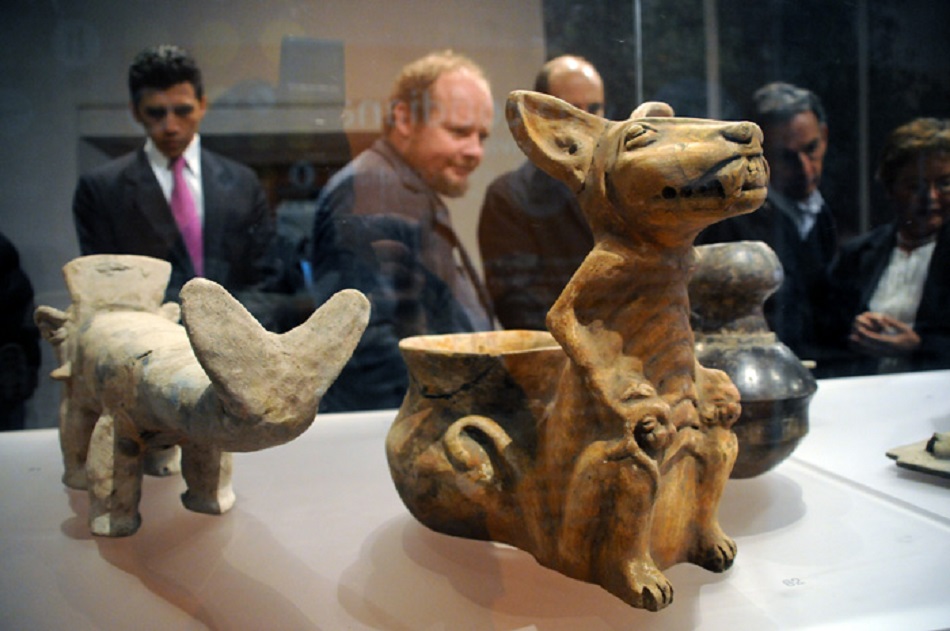 The pottery of this civilization was very well made, which helped it positively withstand the passing of the years. This, in turn, has been used for the production of many objects, including gadgets that the locals used in their daily lives; Likewise, ceramic instruments were used in the production of structures, for parts of religious rites and ceremonies.

The transcendence of the masks lies in their defined and unique way of handling gold and silver, which in turn reflects their high social status, as well as the impetus of their religious and ceremonial life. The marks were usually made of gold and tumbaga; and the dimensions of these were around 17.5 centimeters long and 13.6 centimeters wide.

Many of the sculpted effigies, the most frequent had a representation of a human head, with spherical complements and the upper part sectioned horizontally. Sometimes his eyes and mouth were open; these were simple figures, but carefully worked and with very varied details, depending on the pieces.

Motivated by the theft of treasure hunters and the clandestine trade of archaeological artifacts that has developed in recent centuries, of the total of 40 tolas (gold pampas), known on the island of La Tolita, only 16 remain.

The Tumacos were expert potters and are valued as one of the best pottery cultures in all of the Americas. In the ceramics of Tumaco, we can visualize various qualities of daily and religious nature, such as the content of motherhood, women, eroticism, illness and old age.

If you found this article of the Tumaco Culture interesting, we invite you to enjoy these others:

The content of the article adheres to our principles of editorial ethics. To report an error click here!.

Full path to article: Postposm » Colombia » Get to know the Tumaco Culture and characteristics